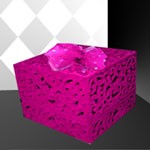 Julie S. Brandon
Where Digital Meets Fiber
red-dogenterprises.com
Posted by Unknown at 10:29 AM